Media content is usually considered “political” if it refers to current events and issues, to political institutions or actors, as well as to the public discourse among these actors. If the term “quality” is used to speak of more than just a trait, it refers to a trait that is desired according to some standard or norm. In this sense, the quality of political media content refers to the degree to which this content fulfills normative requirements.

There are many sources of norms or standards for media content, resulting in a broad variety of criteria by which content may be assessed. Standards mostly pertain to the media’s function of providing information and orientation and to news content. The core of those standards is formed by professional theory and practice of journalism. Many quality criteria are derived from the intention to best serve media consumers’ individual orientation needs. Others, possibly coinciding, are derived from the notion of a public interest that the media should serve. A particular field of empirical media research has established itself, which aims at assessing the quality of media performance.

Serving the public interest may in itself be considered a political quality since it involves debate or other forms of democratic decision-making to determine what lies in the public interest. Serving the individual orientation interests of users may too be considered a politically relevant quality, since it is a prerequisite for rational political opinion formation and decision-making. From this one can conclude that the core quality criteria of professional journalism must also pertain to political media content: objectivity, diversity, and readability.

No matter which form political systems take, in mass societies their functioning is dependent on the mass media. After all, politics can be conceived of as largely, or even solely, consisting of communication acts (Meadow 1980), and in modern states, unlike ancient city states, there is no alternative to involving citizens and societal groups in politics through the mode of mass communication. On the other hand, the structure of a mass media system is determined by the structure of the political system.

The norms prescribing how the media should function can thus diverge widely, depending on the respective structure and values of a political system. What is functional for one system may be dysfunctional for another. For example, in totalitarian systems, diversity of media content will typically be dysfunctional, whereas it counts as a core quality in the context of democratic systems. Siebert, Peterson, and Schramm’s classical Four theories of the press (1956) discusses the norms of political systems as a major shaping force of media systems, and accordingly categorizes media systems as “libertarian,” “social responsibility,” “communist,” or “authoritarian,” with the first two models describing democratic media systems. A strong impact of political systems on media systems is confirmed by a recent and analytically more detailed study by Hallin and Mancini (2004).

In principle, media functions as defined by nondemocratic press theories – like, for example, Lenin’s theory of the press as an agitator, propagandist, and organizer – might be interpreted as “quality” criteria in a totalitarian sense. Yet, the vast majority of the pertinent literature deals with quality criteria of media content in the context of democracies, for two reasons. First, independent and public scientific research on media and communication is not functional for totalitarian systems and thus remains an enterprise limited to the boundaries of democracies. Second, the spread of democracy to many countries in the world has caught the attention of scholars. This goes in line with an increased need for explaining the character of democratic regimes and the role of mass media therein.

This development has also fostered research that aims at defining and measuring the dimensions and degrees of democratic quality and at comparing them between different political systems. According to the most influential work of Dahl (1989), the degree to which countries meet the ideals of democracy can be assessed by measuring to what degree they meet the following five criteria: voting equality at the decisive stage; enlightened understanding; control of the agenda; inclusiveness; and effective participation. Whereas the first criterion is not dependent on the performance of the media, all other criteria are: enlightened understanding refers to the ability of citizens to make informed and rational decisions. The third criterion states that citizens have the opportunity to place their issues on the agenda of the political system. The fourth and fifth criteria demand that all citizens have an equal chance to take part in and influence the democratic process.

From this it is not yet clear which content traits would contribute to Dahl’s criteria being met. Indeed, research assessing democratic quality does not deal with this issue. Rather, some of the manifold indexes that have been developed to measure the quality of democracy in democratic audit projects utilize freedom of the press as an indicator of democratic performance (see, e.g., www.democraticaudit.com; Munck & Verkuilen 2002).

That freedom of the press alone will assure the beneficial effects of mediated communication for democracy is a tenet of libertarian democratic theory, which has its roots in classical texts originating from the era of Enlightenment and later on the era of utilitarianism. The first is closely associated with John Milton’s tract Areopagitica, which introduced the notion that freedom of the press can be deduced from the right of the individual to defend him or herself against the state on grounds of natural law. The second is closely associated with the liberal thinkers of the eighteenth and nineteenth centuries, John Stuart Mill above all, whose central argument held that individuals are capable of using reason and distinguishing right from wrong as long as they may access the ideas of others. According to this theory, human ideas and opinions prove themselves only in a process of mutual challenge, an adjustment which calls for an open marketplace of ideas.

Already from this early version of libertarian theory, three quality criteria may be derived. First, as a correlate to press freedom, the mass media have to realize diversity, for the sake of guaranteeing a marketplace of the broadest possible range of ideas. Second, they have to report objectively, in the sense of neutrally trying to reproduce the many claims and opinions that society holds. Third, one might see the duty of the press to serve as a “watchdog,” i.e., to scrutinize government and to criticize all attempts of abuse of power by the government that might restrict the citizens’ freedom of opinion (given by law of nature) or freedom of the press (derived from utilitarian reasoning; Voltmer 1998).

The changes brought about by flourishing capitalism in western democracies during the nineteenth and twentieth centuries led to a revision of the original libertarian theory of the press. The virtually autopoietic mechanism of truth revelation posited by libertarian theory was challenged by empirical data collected by the US Commission on the Freedom of the Press (Hutchins Commission). These findings in particular showed that practices of the yellow press – sensationalism, neglect of relevant and substantial issues – had come to dominate and that the press in general did not supply equal access to different voices but rather was a forum for the powerful. As a reaction to this, the Hutchins Commission provided a set of criteria against which to judge contemporary media performance, which detailed the norms of objectivity and diversity and extended the duty of the press to not only check on government but to scrutinize powerful particular interests too. 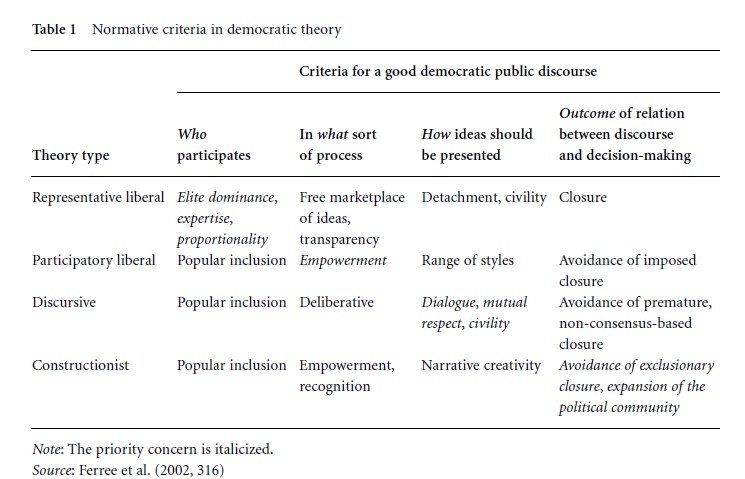 Further variations of liberal democratic theory and corresponding inferences for quality criteria during the twentieth century can be observed. Ferree et al. (2002) differentiate between a representative and a participatory strand of liberal democratic theory, which have both developed further, partly conflicting quality criteria (Table 1). The representative liberal strand holds it necessary that for the free marketplace of ideas to function it has to be supplemented by the criteria of elite dominance, expertise, proportionality, and transparency. Thus, the core idea of representative liberal theory holds that democracy will actually function better if average (i.e., under-qualified) citizens rather stay out of the account that media give of reasoning, debate, and action, and that media should focus rather on elites and experts. Correspondingly, the focus on these actors has to be proportional to the distribution of interests they represent and their actions must be made transparent to the public for the sake of accountability.

Quite the opposite, participatory democratic theory requires empowerment as the most important responsibility of media discourse, which means to engage as many citizens as possible in public life. This goes along with a need for giving ordinary citizens a chance to be heard (popular inclusion).

A still more recently developed normative democratic theory, which otherwise appears to be quite close to participatory liberal theory, holds deliberativeness to be the most important quality criterion. This means a “process in which one provides fully developed arguments for one’s own position and takes seriously and responds to the arguments of others. It involves recognizing, incorporating, and rebutting the arguments of others” (Ferree et al. 2002, 306). This view mainly originates from Jürgen Habermas’s (1998) deliberative model of democracy, which also considers it crucial that actors from the periphery of the political system too should be offered opportunities to join in political discourse by the media.

The last theoretical tradition identified by the authors is the constructionist theory. Scholars from this tradition have a critical approach in common and tend to focus on hidden inequalities in public discourse. Thus, they focus on narrative patterns and deem recognition of the distinctive standpoints of actors an important criterion.

Apart from criteria concerning the participants and the sort of process that is supposed to mediate their communication, two further dimensions of quality criteria can be distinguished by which the different types of theory are characterized. The first one focuses on the different communication styles that are considered to be functional. Except for representative liberal theory, all theories have a preference for specific styles because of their potential to include the largest possible fraction of citizens. The second dimension, closure, concerns the time at which everybody can agree that the matter has been decided and attention may be dedicated to other issues. Again, depending on which theory one adheres to, closure is considered either a positive or a negative trait.

Scholars in the field of political communication have concentrated much of their research on issues related to creating and maintaining high-quality democratic governance (Graber & Smith 2005). The most frequent application of the diverse quality criteria derived from different strands of democratic theory lies in serving as frameworks for devising content analytical categories. A great many content analyses try to assess media performance using such criteria. Among the rather consistent findings are those showing that in many western democracies, content and style of media have undergone tabloidization in one form or another during recent decades (Esser 1999). Other important findings point to the fact that in international comparison, high quality criteria will be realized greatly depends on the respective nature of political cultures and polities.

Obviously, quite different normative notions exist among pundits as to which features of media discourse foster the quality of democracy. For example, little agreement may be found among scholars either about the requirements of democratic citizenship and the implications of empirical findings about citizens’ political knowledge, or about the way that political messages should best be constructed for voters to make sense of them (Graber & Smith 2005, 483). Whereas the majority of scholars so far see tabloidization and infotainment rather as a threat to democracy, some would argue that, on the contrary, infotainment might contribute to boosting the reach of political messages and also might contribute to a better understanding among those shunning complex messages (Zaller 2003).

Thus, it is a big desideratum for research to establish more proof concerning the causal connection between content features and democratic performance. This, of course, is a demanding task calling for long-term cross-sectional and cross-cultural research on the micro and macro levels.