Communication technologies have been seen both as instrumental and as destructive to democratic processes. The advent of the print media is intrinsically linked with the struggle for civil liberties and the construction of contemporary nations. At the same time their destructive capacities became equally clear when, for instance, at the end of the nineteenth century Hearst propagated war against Spain, and the French newspapers assisted in dividing the country during the Dreyfus affair, some of them relying heavily on anti-Semitic imagery. Similarly, the audiovisual media brought political voices and faces into the living room, but after Goebbels’s usage of the radio waves, their democratic capacity could no longer be taken for granted. Communication technologies are not necessary neutral instruments in the service of Enlightenment. They are always embedded in ideological constellations that may be democratic, but also may be totalitarian.

It is important to take a close look at democracy, as there is considerable variety in its significance due to the diversity of democratic theories (see Held 2006) and practices (Fig. 1). Some models restrict democracy to more centralized and elitist forms of societal decision-making, protected by a legal-procedural articulation of democracy and a narrow definition of the political (as the political system). Other democratic models cherish a more decentralized version of societal decision-making, supported by a more substantial and/or culturalist interpretation of democracy and a broad definition of the political as a dimension of the societal. 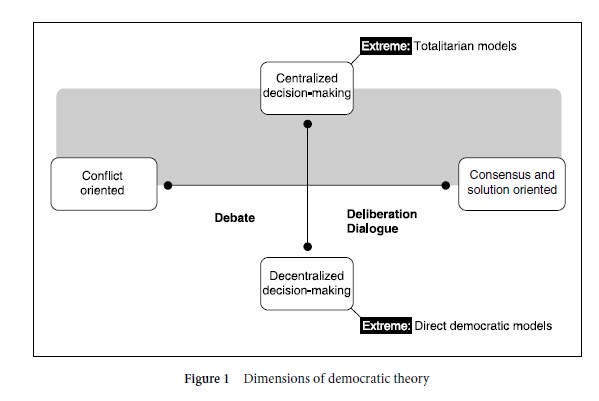 A second dimension in democratic theory focuses on the main structuring concept that underlies the societal decision-making process and which ranges from conflict to consensus. In the first case, the socio-political is seen as being dominated by manifest and latent conflicts, possibly within the context of hegemonic projects. The confrontation between different societal groups leads to (heated) debates and claims of victory. In the second case, consensus is seen as the main societal organizing principle, focusing on the presence and achievement of societal harmony and unity. Here, processes of deliberation and dialogue support a harmonious polis and (if necessary) aim to stabilize the disruptions of this harmony.

Approaches To Communication And Democracy

The role of communication technologies in democratic processes cannot be separated from the political-ideological debates about the nature (and limits) of democracy itself. It is no coincidence that in the western media studies literature, theories of the (democratic) role of the media within society are designated as “normative theories.” The often-cited starting point here is Four theories of the press (Siebert et al. 1956), based on the work of the Hutchins Commission, which contains insights that remain surprisingly relevant in contemporary times.

The two models Siebert et al. describe that are relevant here are the liberal (or libertarian) and that of social responsibility. These focus strongly on information, but the function of the media is complemented by their role as a watchdog over the authorities and by the need to create an independent forum for debate, a so-called marketplace of ideas. The importance of information for a political community in enabling citizens to make informed choices is rarely contested, although the “quality” of the information, its relevance and the degree of bias, are the subjects of ongoing debates within media studies.

As the treatment of these issues in Four theories of the press was considered too reductionist, McQuail (1994) added several models: the development model and the participatory-democratic model, which were replaced in the fifth edition of his Mass communication theory (2005) by the alternative media model. All of these models foreground the participatory role of the mass media. Here, it is important to distinguish between participation in the media and through the media. Participation through the media deals with the opportunities for extensive participation in public debate and for self-representation in the public sphere. Starting from a broadly defined notion of the political, consensus-oriented models of democracy (and participation) emphasize the importance of dialogue and deliberation and focus on collective decision-making based on rational arguments in a public sphere à la Habermas. Other authors (Fraser 1990; Mouffe 1994) stress more conflict-oriented approaches. They point to the unavoidability of political differences and struggles and call attention to the articulation of the media as crucial sites of struggles for hegemony. Both consensusand conflict-oriented models enable the need for citizens to participate in these processes of dialogue, debate, and deliberation to be emphasized.

With the arrival of the new information and communication technologies (ICT), hopes for an increase in democratic communication were reinvigorated. The arrival of a new generation of so-called “new” media had an effect on the nature of discussions about democracy, participation, and the media. The importance of access increased, as techno-utopians emphasized that we would all gain access to all information at all times. Interaction and interactivity became the new buzzwords of the world of ICT. One of the major differences from the media landscape before the introduction of the Internet (and more specifically before the world wide web) is the reduced role of mainstream media organizations in the new media environment. Not only ordinary users but also civil society organizations (van der Donk et al. 2004; Cammaerts 2005) are enabled or empowered to avoid the mediating role of the “old” media organizations, to publish their material (almost) directly on the web, and to establish communicative networks that (often) support more decentralized models of democracy.

These reflections partially build on the earlier work of participatory theorists such as Barber (1998). His analysis points to the potentially beneficial increase in information, which challenges the “existing political hierarchy’s monopoly on powerful communications media” (Rheingold 1993, 14), the strengthening of social capital and civil society (Friedland 1996), and the opening up of a new public sphere, or a “global electronic agora” (Castells 2001, 138). When this discussion is framed in terms of the quest for more direct and/or deliberative democracy, notions of power and decision-making are explicitly highlighted. Budge (1996, 1), for instance, defends the move toward more direct democracy, where “public policy can be discussed and voted upon by everyone linked in an interactive communications net.” In reaction to these bold statements, there has been a critical backlash partly from a production perspective, pointing to the control by large media and communication corporations of the Internet despite its potential independence from large-scale media organizations. The “heaven on ICT user earth” perspective also has been questioned by focusing on problems of access and interaction/interactivity. The lack of access for some has foregrounded the notion of the digital divide. Although the level of interaction may have increased, it is questionable whether societal and media participation have increased proportionally, or whether Penny’s (1995, 54) term “interpassivity,” referring to the “Pavlovian interactivity of stimulus and response,” is a better characterization of recent developments.

When attempts to deepen democracy are contrasted with representative democracy, the critique of “technopopulism” (Coleman & Gøtze 2001, 5) is relevant. It is important to keep Barber’s (1984, 289 – 290) words in mind: “Instant votes of the kind envisioned by certain mindless plebiscitary democrats are as insidious as interactive discussion questions are useful.” ICTs can be used to deepen the democratic process but their embeddedness in a democratic culture – at the societal level and at the level of media organizations – is necessary to overcome token democracy and pseudo-participation.