Systems theory reveals that organizations are integrated into their social environment by means of a network of relationships. In part, this rationale of organizational success motivated Harlow, who used the term “public relations” (PR) to describe the field of “all types of relations an organization has with its publics” (1957, xi). Systems theory and relationship analysis help explain why PR can be reciprocally activated: an organization and its reference groups observe, analyze, and rate each other regularly, particularly when it seems to be relevant because of expected risks and chances. On the organizational side, it is the task of PR activities to arrange these processes as communication management and to intervene communicatively if it seems to be necessary or expedient.

How each organization understands and appreciates its reference groups’ opinions, acceptance, and/or behavior will affect how the organization responds to these groups. For effective PR interventions to be made, the relevant reference groups must be identified and their positions on various issues evaluated, along with their attitudes toward the organization. This, in turn, requires appropriate methods. The concept of public relations field dynamics – presented to a professional audience for the first time in 1992 – is one such method. It can be used to identify central qualities of PR, to demonstrate them in context, and to track them over time.

The model of public relations field dynamics (PRFD) offers a simple but effective instrument for the observation and description of changes in the relationships between several organizations and publics in any network. For instance, the situational theory of publics makes it possible to define – on the basis of three indicators (awareness of problems, awareness of consternation, and disposition of engagement) – the attitude of each single reference group toward an organization, and allows practitioners to predict behavior by analyzing the situation (Grunig & Hunt 1984). Alternatively, the system of markets of opinion can be applied to differentiate several basic frames of public communication (Szyszka 2005). The PRFD method provides a combined observation and graphical presentation of different reference groups in a group field, and clarifies changes in the network of relationships by comparing the results over time and by various positions on a specific issue.

The PRFD model also works with three indicators: valuation of relationship, valuation of attitude, and degree of influence. Initially, the current status of the relationships between an organization and its reference groups is identified and graphically presented. The synopsis of the findings also makes clear and measurable the relationships between the different reference groups. If the status is defined periodically or if it changes under the influence of incidents (e.g., disputes), the dynamic in the field of PR can be demonstrated and strategically evaluated. In order to make prognoses it is not sufficient to evaluate the actual situation (i.e., take a snapshot). As this situation is the result of a process whose further development should be predicted, the earlier development of the group field has also to be included in the analysis.

Issue management tracks the development of issue careers in public communication in order to draw conclusions with regard to risks, chances, or the possible need for action. PRFD focuses – under the influence of the development of public communication – on the reference groups. The two methods complement each other. Methodologically, the PRFD system is adapted from the system for the multiple-level observation of groups (SYMLOG) theory proposed by Bales and Cohen (1979), which is a social psychological method for the analysis of the development of relationships in small groups. In its graphic representation, SYMLOG takes the form of a three-dimensional field diagram. The two orthogonal dimensions – “task orientation” (controlled versus emotionally expressive behavior on the vertical axis) and “social emotional orientation” (friendliness versus unfriendliness on the horizontal axis) – build a field in which a third, also bipolar dimension called “degree of influence” (dominance versus submissiveness) is positioned as a target circle. Springston adapted the SYMLOG model to describe PR in an appropriate way (Springston et al. 1992; Springston & Keyton 2001). While the dimensions of “social emotional orientation” and “degree of influence” have been retained, he changed the dimension of “task orientation” to one of “community orientation versus self-orientation.”

These dimensions can be described as follows. By measuring respondents’ perceptions, the dimension of “friendly versus unfriendly relationship” (valuation of relationship) expresses the basic orientation of a reference group as an attitude toward the organization and other relevant groups. It thereby reflects social trust or distrust, acceptance or insecurity. The decisive factors at this point are reciprocal interests and their orientation, combined with consternation and existential orientation as social emotional influencing factors. The overall evaluation of the relationship of one or several reference groups to an organization as friendly versus unfriendly (friend or foe) at first sight appears stereotypical 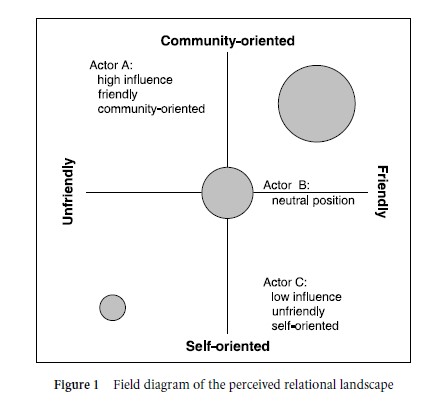 in that it differentiates groups that are expected to be supporters and groups with opposing interests and therefore with a potential for conflict. But between these two polarities, all levels of interaction – including the neutral position – can be scaled.

The dimension of “community orientation versus self-orientation” (valuation of attitude) shows how far a reference group evaluates another of the organization’s reference groups or the organization itself as community-oriented or self-oriented. This judgment is important for understanding the decisions and the behavior of an organization. For example, willingness to examine the interests of social groups and their concerns can be considered as a recognizable intention to seek social integration (community orientation) and will therefore receive a positive valuation. The consequent focusing of an organization on the question of cost-efficiency (expense) and economic benefit (self-orientation) will be followed by a critical or negative valuation from the reference groups.

The dimension of “low influence versus high influence capability” (degree of influence) shows the potential degree of influence a reference group ascribes to another relevant group or to the organization. In situations without conflicts only a part of this potential is used, because further exertion of influence is not necessary. Only in conflict situations (e.g., concerning sensitive subjects or problematic constellations of interests) will the full potential of influence be tapped, in order for the group to accomplish its own interests –. Knowledge about these potentials belongs to individual PR experts and cannot be shown with PRFD.

Figure 1 illustrates the field diagram of PRFD methodology, placing the friendly– unfriendly dimension on the horizontal axis and the community-orientation–self-orientation dimension on the vertical axis. The influence dimension is demonstrated by circle size within the field. The selection of these three dimensions offers five essential advantages. (1) Each dimension makes an independent statement; the bipolarity of the scale positions them unambiguously. (2) The dimensions are orthogonal, i.e,. they are independent of each other, so alterations to one dimension will not automatically affect the others. (3) Any positioning in the field diagram entails an evaluation of quality or importance; value can be deduced only in the entire context of PR. (4) The field diagram allows issue analysts to reproduce comparative alterations of opinions and attitudes over time. (5) As all actors in any field are in relationships with each other, developments and alterations in the field can be observed and presented (Springston et al. 1992; Springston & Keyton 2001).

PR activities are ideally a process in which target-oriented action requires a strategic activity intent and the decision to follow a procedure is based on systematic analysis. Issue analysis enables PR professionals to appraise communicative trends and potential consequences of public communications in the context of organization-political decisions in order to consult managers, to take precautions against or to prepare for expected controversies and conflicts, and to initiate specific communicative measures. PRFD as an analysis tool gives PR professionals the possibility of considering the relevant publics of an organization as a system of mutual influences. Springston et al. (1992) implied that the use of this tool not only makes clear who are allies or antagonists but also shows who – due to their own neutral position – can be considered as a potential mediator in conflict situations. Considering the development of the field diagrams in time lapse, it is possible to observe changes in positions and parameters and to estimate the degree of the polarization or unification of publics. This analysis allows practitioners to make inferences about the organization, about how it reflects the preferred issue position of others, and about how that can affect social trust. Thus, it is possible to make predictions about the risks faced by an organization that follows its organization-political interests and aims as well as the opportunities for strategic and communication-strategic actions.

Finally, by means of PRFD, it is possible to answer three central questions about the analysis of the public relations of an organization. (1) Which basic attitude do publics have toward an organization? (2) How will the basic organization-political orientation of an organization be evaluated? (3) What kind of influence can different publics exert by implicit and explicit actions? Questions, for example, about the different roles and the different organizational relevance of several reference groups, about situational influencing factors, or about the differentiation of various publics can be formulated in relation to the comparative issue context and lead to models, methods, and procedures for communicating about differences. PRFD does not, therefore, recommend a specific stance on various issues but serves as an instrument for analysis.

The PRFD methodology can aid practitioners in their efforts to develop statements about the current condition of several publics. In the context of issues and problems, the reactions and attitudes of key publics can be predicted. Here public communication can be understood as a system of markets of opinion (SMO). This offers the possibility of differentiating publics in different markets of opinion geared to a specific focus on topics and specific key values. Such a model clarifies the fact that assessments of an issue can differ. For example, the issue of personnel reductions may be differently assessed in the personnel and financial markets, because they offer different conditions (social versus economic acceptance) for accepting key policies. However, the way the competing interests of different publics have to be handled depends, for example, on dominance, majority, and dependency within a certain market field. PRFD connects reference groups to a collective field diagram, as SMO positions opinion markets with partial interests in the common public opinion market.

PRFD provides a social psychological model capable of providing adaptable approaches and models for the description of central issues of PR. In this sense, PRFD is a component of awareness in PR research. The fact that the method has not been widely accepted some 15 years after its first publication (e.g., in the USA: Grunig & Hunt 1984; Botan & Hazleton 2006; in Germany: Röttger 2004, Bentele et al. 2005) does not argue against the method.