Consensus-oriented public relations (COPR) is a concept for planning and evaluating public relations (PR). Especially in situations with a high chance of conflict, companies and organizations are forced to present good arguments for communicating their interests and ideas – in other words, they must make the public understand their actions. Therefore, in the viewpoint of COPR, understanding plays an important role within the PR management process (Burkart 2004).

On the one hand, the COPR model ties up with Grunig and Hunt (1984) and the PR goal “mutual understanding” within their two-way symmetric model of public relations. Grunig and Hunt argue that primarily in situations with a high chance of conflict, PR must try to establish mutual understanding between organizations. On the other hand, the theory and terms of communication used for the COPR model are the ones established by Jürgen Habermas in his theory of “communicative action” (1981). According to this theory, communication always happens as a multidimensional process, and each participant in this process needs to accept the validity of certain quasi-universal demands in order to achieve understanding.

This implies that the partners in the communication process must mutually trust that they fulfill the following criteria: (1) intelligibility (being able to use the proper grammatical rules); (2) truth (talking about something the existence of which the partner also accepts); (3) trustworthiness (being honest and not misleading the partner); and (4) legitimacy (acting in accordance with mutually accepted values and norms). As long as neither of the partners has doubts about the fulfillment of these claims, the communication process will function uninterruptedly.

However, these ideal circumstances are an ideal type of imagination – they hardly ever occur in reality. Often, basic rules of communication are violated and therefore there is a certain “repair mechanism,” which is called discourse. Discourse means that all persons involved must have the opportunity to doubt the truth of assertions, the trustworthiness of expressions, and the legitimacy of interests. Only when plausible answers are given will the flow of communication continue.

Basically, Habermas distinguishes three types of discourse (Fig. 1). In an explicative discourse, we question the intelligibility of a statement, typically by asking, “How do you mean this?”, or “How shall I understand this?” Answers to such questions are called “interpretations.” In a theoretical discourse, we question the claim of truth, typically by asking “Is it really as you said?”, or “Why is that so?” Answers to such questions are called “assertions” and “explanations.” In a practical discourse, we question the normative rightness (legitimacy) of a speech act by doubting its normative context, typically by asking “Why have you done this?”, or “For what reason didn’t you act differently?” Answers to such questions are called “justifications” (Habermas 1984, 110 ff.). A fourth aspect, i.e., the claim of trustworthiness (typical questions: “Will this person deceive me?”, “Is he/she mistaken about himself/herself ?”), is an exception as it cannot be subject to discourse because the communicator can prove his or her truthfulness only by subsequent actions (Habermas 1981, vol. 1, 69).

Discourses must be free of external and internal constraints. However, this is what Habermas calls “contrafactual” because the “ideal speech situation” that would be required for this does not exist in reality. We only act as if it were real in order to be able to communicate (Habermas 1984, 180).

The process of “understanding” is not an end in itself. Normally we pursue the intention of putting our interests into reality. Thus, understanding becomes the mean for the coordination of actions, as the participants involved in this process aim at synchronizing their goals on the basis of common definitions of a situation (Habermas 1981, vol. 1, 143f., 385f.). This leads to the conclusion that commonly accepted definitions of a situation need undisturbed processes of understanding as a prerequisite for deciding what should be done in a given case.

Public Relations As A Process Of Understanding

The COPR model focuses on the above prerequisites. PR managers who reflect on the basic principles of communication will always orient their activities in accordance with possible criticism maintained by the public. However, the COPR model is not a naive attempt to transfer Habermas’s conditions of understanding directly onto the reality of PR. In view of the theory’s contrafactual implications, this would be inadequate. It was rather a goal to gain from Habermas’s concept of understanding new ideas for the analysis of real PR communication. The main impact of creating the COPR model was the possibility of differentiating communicative claims, so that this process of questioning can now be analyzed more systematically.

Especially in situations where conflicts are to be expected, PR managers have to take into account that their messages might be questioned by critical recipients. Members of the publics involved will offer their doubts about the truth of presented PR information, especially when confronted with numbers, other data, and facts. They will question the trustworthiness of the company and its communicators, as well as the legitimacy of the company’s interests. This is illustrated in Figure 1.

For example, if a community plans to build a waste disposal site, this will most likely cause disturbance among the local residents. Sometimes even a citizens’ initiative will be formed that aims at bringing down the project. Normally the local media will support the protests, so a conflict situation can be expected. On the basis of the COPR model, the PR managers of the company planning the landfill should consider that (1) any assertion they make will be examined concerning its truth, e.g., whether figures about the quantity of waste to be deposited are correct, whether air, plants, wildlife, groundwater, etc. are really not endangered; (2) the persons, companies, and organizations involved will be confronted with distrust, e.g., representatives of companies might be taken as biased, experts/consultants as incompetent or even corrupt; (3) their intention for building the landfill will be doubted in principal, either because the basic strategy for waste disposal is questioned (e.g., by preferring waste avoidance as an alternative to landfills), or because the choice of the site for the landfill is seen as unjustified (e.g., because the region has just started developing tourism). Only if it is possible to eliminate such doubts, or, even better, if doubts are prevented from the very beginning, can the flow of communication not be disturbed. 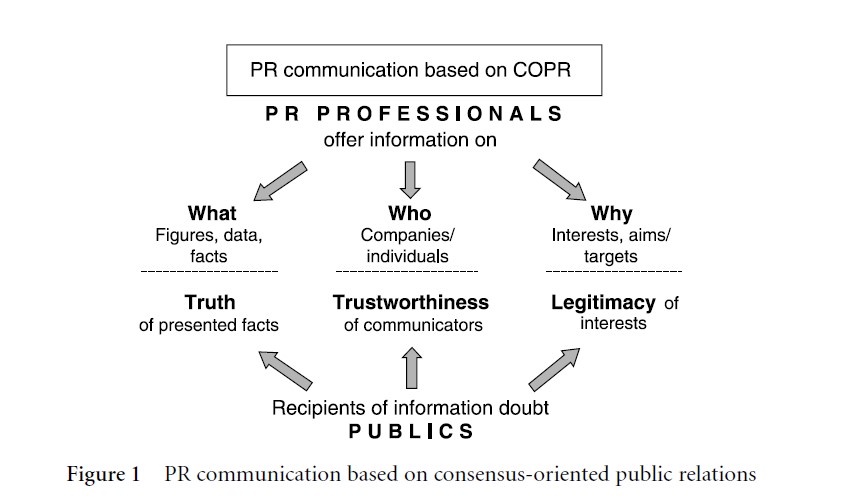 Planning And Evaluation Of Copr

In the COPR process, four steps with corresponding objectives can be distinguished. These steps must be adapted to the actual conflict situation, in order to use COPR as a planning tool. This also makes it possible to evaluate the success of PR activities not only in a summative sense (at the end of a PR campaign) but also in a formative way (meaning step by step). For instance, on the information dimension, the following questions can be asked: “Have the relevant facts been presented?” (What?), “Have the main company figures been mentioned?” (Who?), and “Have the project goals been justified?” (Why?).

In the case of a planned landfill in Austria, the conception of COPR was useful for analyzing and explaining the consequences of the PR activities that the company launched in the conflict that arose from their project (Burkart 1993, 1994). A representative survey showed that the acceptance of building the landfill correlated convincingly with the degree of understanding. Respondents who tended to accept the project were not only better informed but also less likely to question the trustworthiness of the planners and the legitimacy of the choice of site for the landfill.

Nevertheless, the COPR model is not a recipe for generating acceptance. People cannot be persuaded to agree to a project by pressing a “PR button,” because acceptance can only emerge among the persons involved if the process of understanding has worked successfully. The prerequisite for this is that the need for dialogue and discourse on the side of the public is taken seriously by the companies and communication managers concerned, especially when the former feel restricted or even threatened by company interests and plans.