The six Arab countries of Bahrain, Kuwait, Oman, Qatar, Saudi Arabia, and the United Arab Emirates (UAE) passed through similar development stages evolving comparable media systems. With the exception of Saudi Arabia, the smaller Gulf States had been British protectorates, gaining their independence only in 1971 (Kuwait in 1961). Since extensive oil production started in the 1950s, the region has been transformed from a remote area into one of the hubs of economic and technological globalization. Politically, it is still trapped between modernization and tradition. All six states are practically authoritarian, ruled by a dominating royal family despite established parliaments. Islam plays a major role in legislation and in the legitimization of the rulers. The contradiction between technological progress and political stagnation is reflected in the state-of-the-art media that may be privately owned but are normally loyal to the rulers and their politics (Rugh 2004). Because of a serious lack of skilled citizens, large numbers of expatriates work in the Gulf. Not only are they considerable target audiences for the media, fostering the development of English-language media and a pan-Arab orientation, but media production itself depends heavily on expatriate journalists, especially Arabs.

Compared to other Arab countries, mass media were introduced rather late, owing to a low level of development and small populations. Newspapers appeared in Saudi Arabia and Kuwait in the 1960s, while the first dailies circulated in the other Gulf States in the 1970s. Radio was introduced first in Saudi Arabia in 1949, and last in Oman in 1970. TV broadcasting started first in Kuwait in 1961, last in Oman in 1974.

Every Gulf State has elaborate press laws. Publications have to be licensed and are exposed to censorship; nevertheless the governments tend rather to exercise indirect control by issuing subsidies and placing ads. The foreign press is subject to import controls. Taboo topics are the ruling family, religion, and the basic lines of governmental politics. National news agencies disseminate official statements as guidelines for the media. 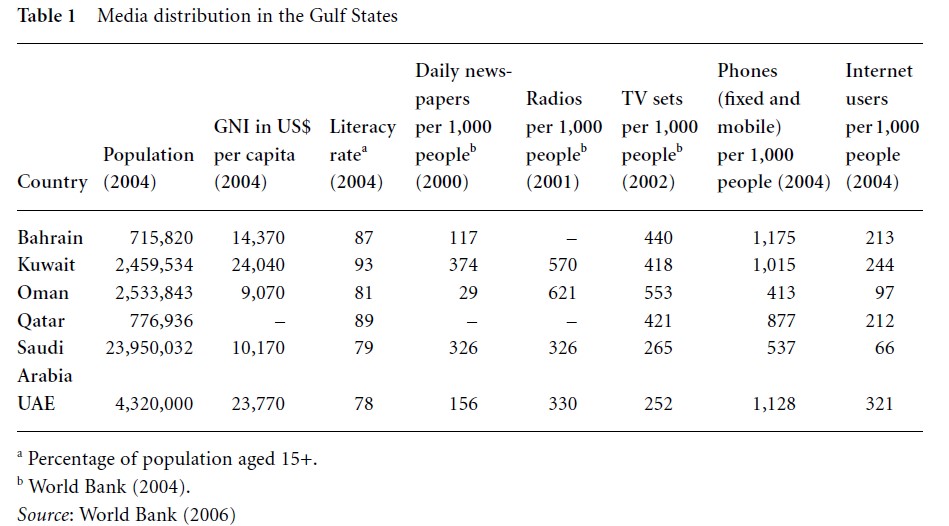 As an effective tool to shape public opinion the broadcasting media were monopolized by the government. In each country except Qatar, the Ministry of Information still controls national broadcasting, normally operating one or two TV channels and several radio programs. The UAE have a federal system with each of the seven emirates operating its own channels. The exception to the loyalist rule is Al Jazeera news channel. Launched by the emir of Qatar in 1996, the channel has become the catalyst of a new Arab public demanding political reform (Lynch 2006).

The press, however, is predominantly privately owned, but passive in style and loyal to the government. Kuwait’s press is the most liberal and diversified. The highest circulation is that of Saudi Arabia’s al-Riyadh with 170,000 copies (Rugh 2004; see overview in Table 1).

The immense increase in oil prices in the 1970s boosted the Gulf States’ revenues, resulting in the elites’ search for new investment opportunities. The smaller Gulf States’ determination to diversify their economy because of decreasing petroleum revenues in the 1990s ironically had similar effects: elites largely invested in media and information technology as a promising economic sector. Back in 1994, the Saudi government still prohibited ownership of satellite dishes, but the more effective means to control the media was to own them (Sakr 2001). Members of the Saudi Arabian royal family control the leading pan-Arab dailies Asharq al-Awsat (launched in 1978) and al-Hayat (1990), the ArabSat Satellite; the MBC broadcasting network (1991) including al-Arabiya news channel (2003) and the pay-TV networks ART (1994) and Orbit (1994). To avoid both arousing opposition from religious zealots and the strict national laws, these media were launched “offshore” from London and Rome. Furthermore, commercial pan-Arab media producers anticipate and obey Saudi Arabia’s strict religious and political guidelines, since it is the largest and most profitable market in the region.

The smaller Gulf States are dependent on western and regional support and have adopted “a circumspect policy of cooperating with everybody” (Rugh 2004: 115). Comprehensive media freedom and tax exemption are guaranteed for international players in the 2001-inaugurated Dubai Media City (DMC) and Dubai Internet City (DIC).

The rapid expansion of the technological infrastructure in the Gulf – reaching standards like those in North America (Ayish 2002) – led to the highest Internet user rates in the region and a saturated telecommunication market. Nevertheless, the Internet is not free of control. With the exception of Kuwait, access to the Internet is only possible through a sole provider. Pornographic or un-Islamic content as well as sites from the political opposition are censored.