Diffusion is a multifaceted perspective about social change in which people, innovations, and the media environment affect how rapidly change occurs. Scholars dating back at least to the German social philosopher Georg Simmel and the French sociologist Gabriel Tarde theorized about imitative behavior at the level of small groups and within communities, and the relation between these micro-level processes to macro-level social change. In the 100 years since, researchers have tended to conceptualize diffusion either at the macro sociological level of sector, system, national, or state change (Dearing et al. 2006), the social psychological or communicative level of local relationships and how those linkages affect adoption patterns as in the classic studies by Katz & Lazarsfeld (1955) and by Rogers & Kincaid (1981), or the psychological level of how individuals perceive innovations in the form of a codified set of pros and cons (Manning et al. 1995). Beginning in the 1960s, diffusion concepts have been operationalized and used to purposively spread pro-social innovations through development communication in Colombia, Pakistan, Brazil, Nigeria, India, Finland, Korea, Tanzania, Bolivia, and Vietnam (see, e.g., Puska et al. 1986).

Since 2000, diffusion studies have traced and explained the spread of kindergartens across cultures throughout the world, the spread of schools-of-choice policies among the 50 states in America, the diffusion of tobacco-control policies back and forth between Canadian and US political jurisdictions, the adoption of participatory approaches in community health system planning, the spread of e-commerce, and the online spread of social norms among adolescents. Studies such as these form the basis of the generalized codification of key concepts and the general over-time pattern of diffusion from a literature of more than 5,500 publications as best synthesized by the communication scholar Everett Rogers in his successive editions of Diffusion of Innovations. Diffusion concepts have also contributed importantly to theoretical and conceptual development of social learning theory, technology transfer, dissemination strategy, social network theory, entertainment education, and now the science and practice of translational studies (Singhal & Dearing 2006).

Rogers (2003, 5) defines diffusion as “the process in which an innovation is communicated through certain channels over time among the members of a social system.” An innovation is anything that potential adopters perceive to be new, inclusive of new ideas and beliefs, explicit and tacit knowledge, processes and protocols, tools and technologies, even value belief systems. The first 2.5 percent of adopters are innovators; the next 13.5 percent early adopters (a category that includes the subset of opinion leaders); followed by the early majority (34 percent), late majority (34 percent), and laggards (16 percent). Diffusion conceptualizes individuals as progressing through stages of change as they first confront, make sense of, and then routinize that which was new to them.

Newness is key in diffusion processes, since the perception of newness creates uncertainty in the mind of potential adopters about what they should do or how they should respond to the opportunity presented to them about the innovation. Uncertainty, in turn, leads to a feeling of discomfort or cognitive dissonance, which propels the individual to seek out, first, descriptive information about the innovation (typically through efficient mediated communication channels such as the Internet), and then evaluative information about how well the innovation performs (most often through nonmediated and mediated interpersonal discussion and observation of others’ behaviors). It is at this point that perceptions of the attributes of innovations become important. Simplicity, low cost, effectiveness, how observable the results of an innovation are, and how trialable an innovation is are all attributes positively related to individual-level adoption and system-wide diffusion.

Thus, in diffusion processes, communication of information through mass and specialty media often precedes the communication of personal influence through informal communication networks, especially local networks. Because people tend to communicate with others whom they recognize as similar to themselves, real and perceived heterophily slows diffusion. Innovations can spread rapidly within one clique or network of like individuals, and then take years to achieve acceptance in other networks where members differ in terms of demographics, ethnicity, behavior, and situation.

Many diffusionists take a macro-structural perspective on diffusion, especially those in population planning, demography, economics, international relations, anthropology, and linguistics. Such scholars conceptualize waves of innovations washing over societies, and serving as the means by which social change occurs, as in agenda building or agenda setting. Their units of adoption are countries or cultures. A macro-orientation to diffusion is highly enticing to scholars because of its deductive and parsimonious potential based in a simple mathematical law of nature that describes a logistic (S-shaped or exponential) growth curve (see Fig. 1). Marketing scientists, epidemiologists, demographers, and political scientists create and test mathematical models of diffusion, based on this predictive potential and eloquence. 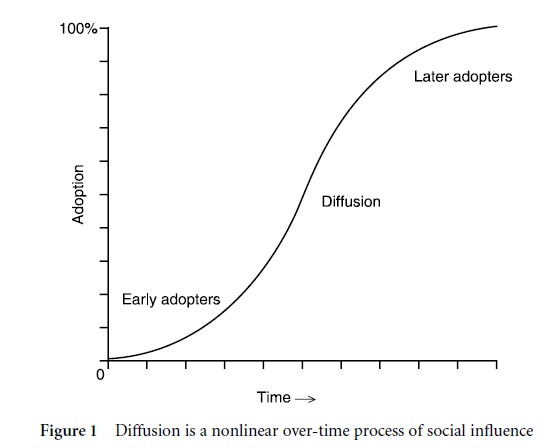 Other scholars, including many in communication studies, conceptualize diffusion at a micro level of analysis of focusing on the predictors of positive adoption decisions of individuals or organizations, or interpersonal relations and how they mediate the effects of information exposure about innovations, or local social networks and how network position is related to adoption decisions.

The diffusion paradigm is noteworthy, especially in the work of Rogers (2003), for deliberately offering explanations based on empirical studies of how macro-change processes are linked to micro-individual and group-level processes. The explanations offered show both how micro-level units of adoption (usually people) are influenced by system norms, as well as how system change is dependent on individual action. Diffusion is one of the very few social theories that persuasively links macro with micro-level phenomena.

Mass communication channels are the most efficient means for spreading awareness of innovations that have popular or broad appeal. When the innovation in question is only an idea, as in knowing something new, awareness equates with adoption. Often, however, agencies or organizations have objectives that require more of adopters. To adopt, they must engage in a new practice, buy a new service, or commit to learn a new routine. In these cases, mass communication functions to raise awareness and, for some, produce information seeking behavior. For innovations with specialized appeal, such as new medical procedures or disease-prevention interventions, specialty media in the form of targeted magazines, industry newsletters, and conference presentations function to spread awareness.

The promise of new media, especially the Internet and portable telecommunications, is high, and not only for speeding up the awareness of innovations. New media, especially formats such as tailored interactive web pages that allow for portrayals of innovations, can be designed to encourage choice and a sense of ownership among potential and actual adopters, to show social modeling of the innovation, and to increase efficacy. Customized websites can, for example, increase the likelihood that modifications made during the implementation of adopted innovations will not be counter-productive. Insisting on innovation fidelity by discouraging or prohibiting adaptation is negatively related to adoption. Portable digital assistants and cell phones can be used to reinforce decisions in diffusion-based health campaigns.

Many people assume that high quality, especially when paired with low cost, will result in rapid diffusion. This expectation is often not met. Many innovations that have a tangible basis spread because of other factors, such as bandwagon effects in which managers or administrators are afraid of lagging competitive rivals, or because the decision to adopt is decoupled from responsibility for implementation. In both cases, diffusion can be extensive, but implementation and use can be quite limited.

The diffusion literature includes many examples of advantageous innovations that do not achieve widespread use, even after many years, and even when campaigns are conducted to publicize them. This is so even for highly effective “best practice” innovations that have demonstrated, empirical advantages compared to alternative ways of achieving the same ends, and it is so even when studying diffusion within the same organization, where the rate of adoption might be expected to be more rapid than the adoption across separate organizations. Concerning innovation diffusion, what is best and what is used are frequently different. For example, in the field of health promotion, a computer simulation by Stover et al. (2002) found that if proven programs in HIV/AIDS prevention were actually adopted worldwide, 29 million new infections could have been prevented by 2010.

Cases from the diffusion literature do not stop at highlighting effective innovations that do not diffuse; we also have cases of innovations with very important implications for adopters that spread prior to the communication of any information about their effectiveness, such as in the rapid imitation of strike behavior by eighteenth-century coal miners as studied by Conell & Cohn (1995). Fads and fashions occur regularly; having an innovation received by potential adopters as fashionable can be highly desirable. Yet other studies have documented the diffusion of ineffective innovations.

In sum, while effectiveness is typically positively related to positive adoption decisions, the correlation can be weak, with other factors more highly correlated with adoption. Social influence is one of those factors.

Diffusion As A Social Process

Beginning with the empirical results of Ryan and Gross (1943), diffusion has been understood to be a social process. While knowledge is often gained through the largely one-way communication of information, especially with the increased information search capabilities of new communication technologies, persuasion occurs through the two-way communication of social influence, most commonly in the form of local informal opinion leaders who are already in place and who already influence the decisions of others. Information alone, whether in one-on-one counseling, training workshop, website, brochure, etc., is insufficient to move the individual toward a positive decision or even serious contemplation of innovation costs and benefits when the innovation in question is perceived to be consequential by the potential adopter.

Opinion leaders are perceived as expert and trustworthy, influential, credible, popular, a near-peer friend, and accessible. The trait of opinion leadership tends to be stable across time, and operates consistently across social systems such as hospitals, schools, towns, and distributed networks. In intervention work, opinion leaders are especially effective when they are not asked to do too much. Asking opinion leaders to advocate, persuade, promote, or educate in ways they normally would not with their colleagues is asking them to risk their status within the system in question by formalizing what is an informal role.