In interpersonal encounters, people are usually responsive and adaptive to others. Their gestures, voices, and words take on the quality of a dance as they mesh with one another to create a coordinated interaction. Interaction adaptation theory (IAT; Burgoon et al. 1995b) predicts and explains how, when, and why people adapt to another’s verbal and nonverbal communication in similar or dissimilar ways. It focuses on how pairs of communicators – actors and their partners – coordinate their communication styles with one another in ongoing conversations.

Definitions Of Adaptation And Related Processes

The process of interaction adaptation is complex, nonobvious, and at times invisible. It can take a variety of forms, some of which are defined in Table 1 (see also Bernieri & Rosenthal 1991). 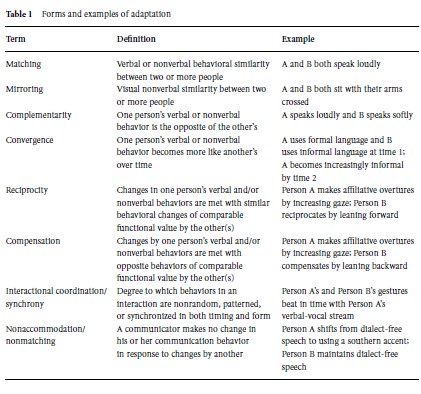 Table 1 Forms and examples of adaptation

Matching need not be adaptation if people are responding to the same external factor. For example, two people may both have the jitters because they are seated in a very cold room or are nervously waiting for medical test results. Reciprocity and compensation, which are the two patterns of greatest interest to IAT, are adaptive in that one or both parties are directing their actions toward the other person and responsive to what the other is doing. Behaviors that are interchangeable or substitutable (e.g., smiling and warm voices to signal liking) can be used to reciprocate or compensate for one another as long as they are part of the same collection of behaviors that signal the same general meaning or serve a particular purpose, such as signaling attraction or expressing an emotional state.

IAT draws upon assumptions about interpersonal communication from other theories (Burgoon & White 1997). It assumes that humans are biologically programmed to attune to other members of the same species and that adaptation has survival value. Infants, for example, synchronize their own biological systems to a mother’s heartbeat; courting couples exhibit intricate, hidden patterns of flirtatious actions and reactions to one another (Grammer et al. 1998). Communication is made possible by humans calibrating their messages to one another, and human social organization is thought to depend on a “norm of reciprocity” whereby society’s members are expected to trade good for good and avoid doing harm in exchange for safety from harm. All of these perspectives point to humans adapting in reciprocal ways.

Other biopsychological perspectives lead to predictions that humans will sometimes respond with compensation rather than reciprocity. Like other species, humans are equipped with reflexive fight–flight and approach–avoidance tendencies that may lead to withdrawal in response to another’s approach. An aggressive move forward may be met, for instance, with a submissive step backward or a threat stare may be responded to with downcast eyes. As proposed by communication accommodation theory, yet other compensatory actions may be deliberate and strategic rather than reactive. Responding to another’s casual language with hyper-formal language may be intended to create social distance. IAT predicts the conditions under which compensatory versus reciprocal responses are expected.

Components And Principles Of IAT

Adaptation patterns depend on three classes of communication-relevant factors that comprise what is called an actor’s interaction position (IP). These factors are an actor’s (1) requirements, (2) expectations, and (3) desires. Requirements are basic needs or drive states such as refuge, sustenance, comfort, privacy, and insulation from overstimulation. Expectations are the verbal and nonverbal communication patterns that people anticipate from others based on what is typical for a given context, setting, or social roles. General expectations (e.g., people should be generally pleasant and involved during social conversations) can be adjusted for knowledge of individual differences (e.g., knowing that a friend is usually shy and subdued). Desires refer to communicators’ own goals, plans, and personal preferences; they are the “valence” or evaluative component of IAT. They are what people want as opposed to what they expect. Job applicants may want a relaxed and light-hearted environment for a job interview yet expect it to be a formal and sober occasion.

An actor’s requirements, expectations, and desires – RED for short – together form the net index or quotient called the IP. The IP is a summary estimation of how an interactant (usually self ) is projected to behave at any given point in an interaction. IAT spells out circumstances under which requirements supersede other factors, and expectations supersede desires. For example, if someone is extremely tired, the requirement for sleep will override that person’s ability to show expected levels of interest and energy. Or, if a situation calls for formal decorum, that expectation will override one’s desire to show exuberance. When there are no pressing requirements to distract someone, then expectations and desires prevail.

The IP is compared to the actual behavior (A) exhibited by the partner on some behavioral continuum such as conversational interest or pleasantness. Suppose that a behavioral continuum ranges from a low end of complete detachment and disinterest to high involvement and interest. IAT predicts that if the partner’s A exceeds the actor’s IP (i.e., is located closer to the positive end of the continuum), the actor will reciprocate the partner’s behavior. If the partner shows higher interest (A) than what the actor expects (IP), the actor is predicted to reciprocate the partner’s higher interest level. Conversely, if the IP exceeds the A – the actor expects moderately high interest but the partner is detached and disinterested, IAT predicts that the actor will compensate by displaying the behavior expected and desired of the partner (higher engagement). Another example: if the actor desires a pleasant conversation (IP) but the partner appears to be in a bad mood (A), the actor will attempt to change the partner’s bad mood by becoming even more pleasant. If the partner responds in the desired fashion, both parties are predicted to converge toward the other’s behavior and arrive at a point where the IP and A are essentially the same.

Where it is infeasible for actors to change their behavior, IAT predicts that actors will use nonaccommodation (maintaining their current behavior) as a way to resist the partner’s undesired or unexpected demeanor. Over time, however, if compensation fails to bring about the desired level of behavior from the partner, IAT predicts actors will adjust their RED factors and with it, the IP. For example, a person should eventually lose the desire to have a pleasant interaction with someone who is unpleasant and should eventually reciprocate the partner’s negativity. Thus, interactions are expected to be dynamic, cyclic, and evolving events with requirements, expectations, and desires both guiding and responding to what transpires in the interaction.

IAT also takes into account people’s individual communication abilities and behavioral repertoires as well as environmental constraints that may limit the extent to which adaptation is possible. Stated formally, a person’s degree of adaptation is predicted to be a function of (1) own current behavior, (2) own social skills and behavioral repertoire, (3) own previous behavior (which results in some consistency over time), (4) partner’s current behavior, and (5) environmental constraints.

Tests of IAT have taken a variety of forms and have considered adaptation in such varied circumstances as interactions among dating partners, deceptive interactions, and simulated medical interviews. Floyd and Burgoon (1999) experimentally manipulated expectations to create different IPs related to liking and then had participants interact with a confederate who showed liking or disliking. Participants who expected, desired, and received liking displayed more liking toward their partner than those who expected, desired, and received disliking. Those whose IP exceeded the A – they expected and desired liking but received disliking, or expected and desired disliking but received liking – compensated relative to those for whom A equaled or exceeded the IP. Thus, results provided consistent and strong support for IAT.

Other experiments (e.g., Burgoon et al., 1995a, 1995b; Le Poire & Yoshimura (1999) have produced a preponderance of reciprocity but also compensation or nonaccommodation under conditions that could be interpreted as creating negative arousal and discomfort. For example, people interacting with an uninvolved, unpleasant partner showed an average dampening of their own involvement, i.e., they reciprocated, but over time they compensated by increasing their own involvement. Thus, pleasant and desirable behaviour generally begets responses in kind whereas unpleasant and undesirable behavior begets a mix of responses.

Guerrero and Burgoon (1996) examined how people’s various forms of attachment to caregivers or significant others affect adaptation patterns. The majority reciprocated their romantic partner’s increased involvement and compensated for decreased involvement, but, as predicted, patterns varied according to attachment style. Those who were preoccupied with their romantic relationship conformed the most to these reciprocity and compensation patterns; those who had ambivalent feelings about their relationships were the most variable. Other individual differences and contexts for interaction have yet to be tested.