Radio is the medium with the highest relevance for media users in daily life – at least with respect to the amount of exposure time. In western industrialized countries, people listen to radio for about three hours each day, with about 80 percent of daily reach (Table 1).

Radio consumption has decreased massively since the beginning of the twenty-first century, especially among people under the age of 40, due to the increasing use of mobile music media like MP3 players (Schramm 2006). About 90 percent of the radio consumption occurs while people pursue other activities at the same time, such as eating, working at home (e.g., cleaning, cooking, ironing), working outside home (e.g., gardening, office work), or car driving. For instance, 85 percent of US Americans listen to the radio during morning drive time (6 a.m. to 10 a.m. weekdays), and 80 percent listen during afternoon drive time (3 p.m. to 7 p.m.; MacFarland 1997). Studies have shown that radio music listening can positively affect reaction time during simple routine driving (for example, monotonous driving on a highway) and negatively during difficult, demanding driving (for example, in heavy city traffic). In addition, loud music can lead to driving faster, while slower music can lead to improving reaction time in dangerous situations. If a driver experiences music as pleasant, the number of driving mistakes is often reduced. 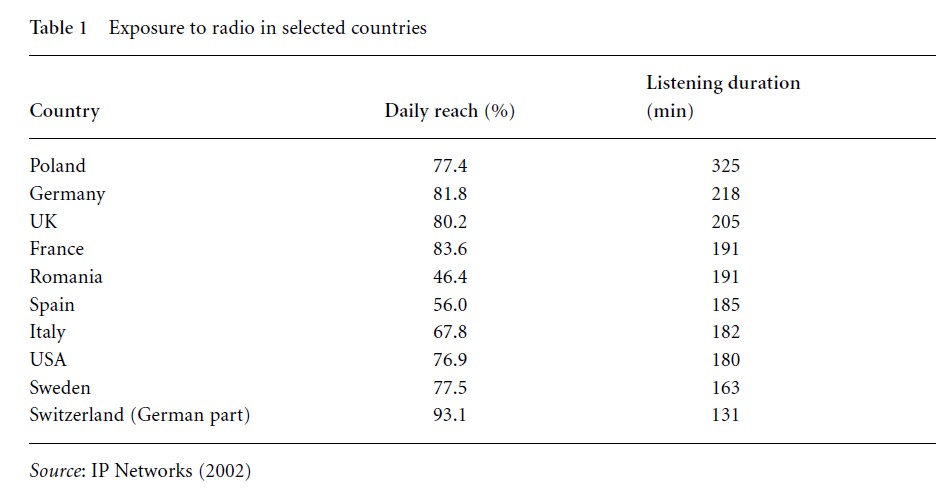 Besides the central function of accompanying other activities in order to ease workload, to abridge time, and to compensate monotony, primarily emotional motives can be identified in radio use (MacFarland 1997; Rubin & Step 2000; Schramm 2006). To these belong mood regulation, stimulation of excitation, activation versus damping/catalyzing of excitation, abreaction, relaxation, wallowing in memories, distraction, day dreaming, social belonging, affiliation, distinction, social comparison, parasocial interactions and relationships, social alternative, and information seeking and life assistance.

The main motive for turning to radio and the primary content of most radio programs is music (aside from news and talk radio) with a music portion, on average, of about 70 percent. According to MacFarland (1997), the most popular music format is adult contemporary (AC) with a target group aged between 25 and 49 years. Its features are hits from the 1980s and 1990s and current hits, primary melodic pop and rock songs, an extensive playlist, and a moderate/reserved young presentation/moderation. Its variations are “hot AC,” “soft AC,” and “oldie base AC.” The format contemporary hit radio (CHR) targets teenagers and young adults between 14 and 29 years. It plays current top-40 hits, has a very small playlist, variance in music genres only according to the formation of the charts, and a young, fresh presentation/moderation. Its variations are, among others, “mainstream CHR,” “dance-oriented CHR,” and “rock-oriented CHR.” The format rock/ album oriented rock (AOR) was created as a backlash against the CHR formats. Its target group consists of higher educated people aged 18 and older. It plays progressive rock music, mainly album songs that have never been in the charts. The presentation/moderation style is unobtrusive and factual. The oldies/gold format is mostly concentrated on songs from one specific decade, e.g., songs from the 1940s and 1950s (rock ‘n’ roll), the 1960s (beat), or the 1970s (disco). The target group is at least 30 years old, depending on the music genre/decade. Further common formats include “country,” “urban contemporary,” “Hispanic,” “Classic,” and jazz.

In order to create music programs compatible with large groups of people, the degree of complexity of radio music must remain rather low (Barnes 1989; Ahlkvist & Fisher 2000); consequently, music research conducted by radio stations remains rather simple (Schramm et al. 2002). One can assume that most radio stations would rather offer music programs at the lowest common complexity level and risk boring the audience than overtax and possibly lose them (Schramm 2006). Because of the fact that “activation” diminishes when people listen to a series of titles with a similar complexity level, radio programmers take certain tonal-structural contrasts between the titles into account when putting together radio programs, specifically changes between fast, more activating, and slow, more calming titles (MacFarland 1997). A radio program can be diversified by changes between music genres, as far as the format allows (for example, switching between pop, rock, soul, rhythm and blues, hip hop, etc.), female and male singers, pure instrumental and vocal, fast/activating and slow/calming songs, old and new songs, text languages, well-known and unknown songs, and changes in the song’s mood, for example changes between happy and sad songs.

Music listening is composed of cognitive, affective, and behavioral elements; in other words, it is determined by mental/intellectual elements (music structure, composition idea, and construction), psychological-emotional elements (sound, sensual stimulation), and physical elements (rhythmic components). Roughly, we differentiate between intentional/ concentrated and unintentional/distracted listening, whereas most radio listening can be assigned to the latter. Moreover, music research has identified quite a number of different listening modes (Schramm 2006).

Because of individual differences in abilities and capacities in the perception of music, it is very difficult to develop radio programs which will be favorably evaluated and used regularly by a large group of people. Nevertheless, radio stations try to reach this ambitious goal by relying on standardized music research (Fletcher 1987; Balon 1990). This research is primarily assigned to check the acceptance of each song and to avoid audience switching to competitor stations. Within the music research of commercial stations, two kinds of music tests stand out: telephone surveys/ “call-outs” and audience/auditorium tests.

Telephone surveys are faster and more favorable, and are preferred by most radio stations. Every week or at least every two weeks, 30 –50 music titles in the form of hooks (salient excerpts from a title with a length of approximately 8 –12 seconds and with the highest presumed recognition value, most often from the refrain) are played over the phone to approximately 100 –200 people randomly selected from the target group. The sample judges every title along several evaluative criteria. As a rule, these criteria involve three aspects: familiarity (“Have you heard this title before?”), pleasure (“How do you like this title?”), and saturation (“Would you like to hear this music title on your favorite radio program more often?”).

In the case of saturation (or “burnout”), listeners are asked whether they hear these titles too often. In telephone surveys in particular, the test titles are those that receive very frequent airplay, and therefore have a high rotation rate, where saturation tendencies are more likely to occur. Telephone surveys have the advantages of quickly gauging the mood changes of listeners and of continuously observing music title developments over short intervals. Accordingly, radio programmers can include or exclude titles with certain characteristic values of current interest from their playlists. Off and on, radio researchers ask additional questions that go beyond the three above-mentioned criteria. For example, they inquire about station affinity (“To which radio station does the title fit?”), emotional expression of the music, or the desired time of the day during which the music should be played.

In data analysis the researchers compile the results from the three criteria (familiarity, pleasure, and saturation) in a so-called “power score” and, through combination with media use data by socio-demographic variables, create target-group-specific title indexes that indicate which title is preferred by which group of listeners. Enriched with additional information about various music parameters, such as music genre, tempo, instrumentation, gender of the performer, lead-in time to the beginning of singing, title length, the way the title ends (“cold” = abrupt end; “cold fade/quick” = quick fade-out; “fade” = slow fade-out), and the desired rotation, the data are fed into the data banks. Based on these data, special computer programs such as “Selector” compute music programming lists that target a specific group of listeners. Subsequently, a music editor has to revise these lists in ways that guarantee a harmonious music program reflecting the philosophy of the radio station.

The second method, audience or auditorium tests, costs more and, for this reason, is funded only once or twice a year by radio stations. For audience tests, a group of up to 300 persons is recruited (in most cases reflecting the socio-demographic composition of the target group) and invited to a large auditorium like a movie theater or hotel hall. There they listen to hundreds of music titles in the form of hooks and evaluate them according to the criteria mentioned above. The group listens to the titles either together on a stereo set (here mutual distractions and possible group behavior limit the validity of the data) or they listen to the titles in an individual random sequence through headphones. In the first phase, sequence effects are neutralized by playing the titles in reverse order (the mirror image method) to a second group of the same size. Such audience tests work well in testing large parts of the playlist, as well as those titles that do not appear on the highest rotation. They also have the advantage of generating a great amount of data in a short time and improving the sound quality of the hooks, or, if headphones are used, optimizing that sound quality, as compared to telephone interviews.