The issue of viewer loyalty has received some attention from academics, but it is of vital interest to broadcasters. Since the beginning of television, stations and networks have tried to promote viewer loyalty in order to increase ratings, advertising revenue, and profits. In fact, the way US broadcasters devise programming schedules – with most programs being shown daily or weekly at the same time – is designed to maximize loyalty. Branding strategies and campaigns have the same goal. However, looking at the history of television, it is clear that technological developments have changed television behavior and have strongly affected viewer loyalty. The following describes in more detail the changes in the US but the pattern would apply to most industrialized countries with multichannel television systems.

Until the mid-1970s most people in the US had about five channels and the three networks had audience shares over 90 percent. One might say, loyalty was high by default. Audience research indicates that most viewers expressed preferences and loyalties to local stations – the stations’ local news programs and also their prime-time programs. But many viewers were not able to correctly connect prime-time programs and the networks that carried those programs.

The increase in the number of channels through cable and satellite and, of course, the remote control changed viewer behavior. First, the change was small: cable networks did not offer very attractive programming and in 1985, barely 30 percent of all households had remotes. However, as cable and remote control penetration grew, a third factor came into play: cable networks – like MTV – started to brand themselves in ways that eluded the major broadcasters. The big networks all showed a variety of programs that were not thematically connected and, therefore, could not as easily be branded. Only the Fox network followed a strategy that was similar to that of the cable networks – a more narrowly defined range of programs and target groups. The increase in choice, combined with new technology that made it simple to exercise choice, started an erosion in viewer loyalty.

These changes prompted a reaction by the broadcast networks. To prevent a further decrease in channel/network loyalty, they persuaded their affiliates to de-emphasize the station brand and focus on network branding. In addition, they started “seamless” programming; that is, they shifted commercial pods away from ends of programs to reduce channel switching at the end of programs. We do not know what would have happened without those measures, but indications are, these steps help slow down the erosion of audience loyalty (McGrath 1998).

In today’s multichannel environment, branded cable channels, branded broadcast networks, and many other media compete for loyalty. As Figure 1 shows, there has been a steady increase in the number of channels available to viewers during the past 20 years. Today, the average viewer in the US has close to 100 channels to choose from – a substantial increase even compared to just 5 years ago. The most recent increase is largely driven by digital cable subscriptions, which provide over 200 choices. 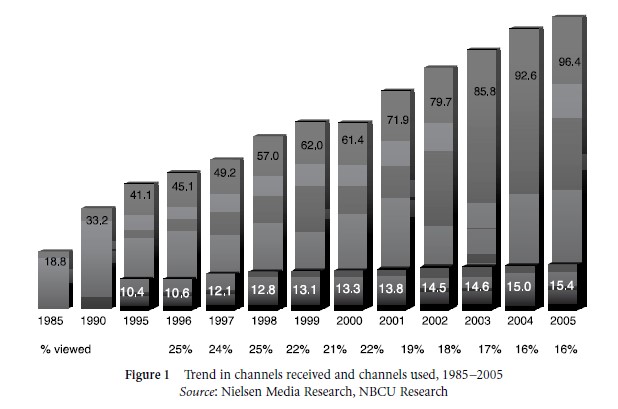 Most viewers use, as shown in Figure 1, only a fraction of the available options. Still, the more channels they have, the more they use and the less loyalty they have, especially compared with 20 or 30 years ago. However, there is little support for this statement by News Corp. chair and CEO Rupert Murdoch: “There’s no loyalty to TV channels. That went with the remote control” (Online Reporter 2005). It is true that the remote and the proliferation of choices for the viewers had a major negative impact on viewer loyalty. On the other hand, branding, programming, and scheduling strategies have counteracted those trends.

Research indicates that most viewers’ focus is indeed on the programs they like, but many networks have established a strong brand that attracts loyal fans (HBO, ESPN, Discovery, MTV, and SciFi are examples of networks with well-defined identities) and the broadcast networks are still seen by most as “leaders” and receive the highest audience shares. The broadcast networks’ branding has led to a stronger link between shows and network than 20 years ago, and the role of local channels has decreased. Further, despite the remote control and the many viewing choices, lead-ins can still create hit programs (as an example, the hit show American Idol almost doubled the audience for House when that show was scheduled to follow it) Even channel position can help a network increase loyalty, and viewing habits seem to have a positive impact on many viewers’ loyalty to networks and stations. In short, loyalty and appointment viewing have not disappeared; loyalty is primarily driven by programs, but the network brand and also the image of local stations can be significant factors.

The number of channels available to most viewers is likely to increase further and we see already today a significant increase in the use of broadband for video entertainment. New Internet brands are emerging that compete with established media brands (Yahoo!, YouTube). This presents new challenges for established media brands that want to maintain audience loyalty. Those brands are already active on the web, trying to use their brand to move consumers between their TV and web products. It appears that both content and brand will be important to maintain audience loyalty.

Technology continues to impact viewer behavior. In May 2007, the digital video recorder (DVR) was in about 17 percent of US homes. Interestingly, new research suggests that the DVR promotes loyalty to programs: it is used primarily to time-shift favorite shows, which are now seen more regularly by DVR owners than by non-owners. HDTV will also play a role in this context because it uses different channel numbers and is, therefore, likely to further diminish the role of channels as a driver of loyalty. At the same time, the increased complexity of media technology and content is confusing many consumers and is making search and navigation more important. This could give a boost to loyalty based on branding.