People who are assertive communicators are strong in their interaction management skills; they are able to initiate, maintain, and terminate conversations skillfully. Assertive people are also able to speak up for what is rightfully theirs and are focused on being successful and achieving their goals. Being competitive, dominant, forceful, and independent are characteristic of being assertive. 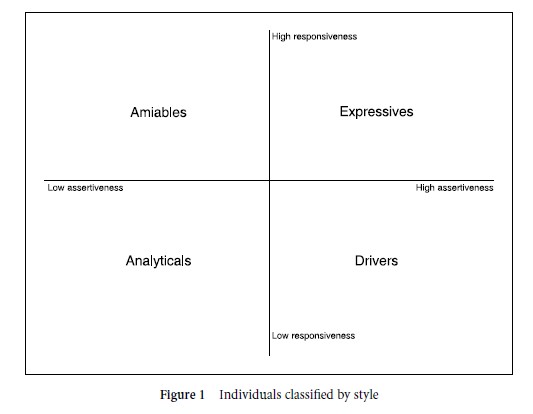 People who are responsive are other-oriented and considerate of others’ feelings. Responsive individuals listen to others and show a general concern for the success of others. Being helpful, compassionate, friendly, and sincere are characteristic of being responsive.

Research has shown that, in the classroom, both teacher assertiveness and teacher responsiveness are positively correlated with nonverbal immediacy. Students view assertive and responsive teachers (i.e., competents) as being more trustworthy and credible. Teachers perceived as having the aggressive style are perceived as being low in character. When teachers are perceived as having the noncompetent style (neither assertive nor responsive), students perceive them as being low in competence and caring, and also express less situational motivation.

Additionally, teachers who engage in both assertiveness and responsiveness are perceived to be more argumentative, whereas instructors low in those constructs (i.e., noncompetents) are viewed as more verbally aggressive. Teachers who are argumentative would focus on the content of a disagreement when discussing controversial issues with others whereas teachers who are verbally aggressive would be more likely to make personal attacks on those with whom they disagree. Students also claim that their competent teachers are clearer and that they learn more from competent teachers. Students are more willing to communicate with their teachers inside the classroom, as well as outside the classroom, when they believe their teachers are assertive and responsive.

Although research has demonstrated the value of teachers being both assertive and responsive, researchers have also noted the need to be flexible. There might be situations where a teacher does not want to be assertive, and where assertive communication could actually prohibit the teacher from being successful. The truly competent teacher would have the ability to be assertive and responsive, as well as the knowledge and willingness to be flexible, communicating appropriately and effectively in a given situation.

Back to Educational Communication.